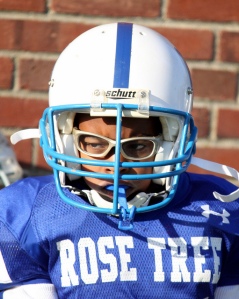 As I sit during the Green Bay Packers football game, watching my almost-ten-year old immersed in each movement of each player and calling the plays and penalties, I am amazed at his passion for and knowledge of the game after only playing for two short seasons. He really knows the game and now that his season is over and he isn’t playing, he can’t wait for Sunday night, Monday night, Thursday night or any night that he can watch an NFL or College football game. And if there isn’t a game on, he makes sure he gets his homework done quickly so that he can play Madden 11 on the Wii. I shouldn’t be too surprised because he has such passion for things that he loves and anything that his brilliant mind grabs a hold of, is processed with intensity.

But still I wonder why football? One of the issues I had with his father was that instead of grabbing his son, his beer and his pretzels and heading down to the man cave to watch the game, he would go down by himself and leave his one and only son upstairs with us girls. And I would feel sorry for him thinking to myself,  “so this is why you were dying to have a son??”  So I was shocked when  he started asking to play football. But I shouldn’t have been too surprised because my brothers had a love for the game yet always watched the game alone too. My dad was either at work or asleep, or just in between.  My son’s father didn’t want him to play football, so I respected his wishes and didn’t pursue it. Then one day my son wrote me a note that said “Mom, I love football and I really, really want to play football.” I was so touched by his note and I knew that even though his father was against it, as a mother, I felt it was my duty to give life to his passions.

Growing up with three brothers and no female sibling at all, I didn’t have much choice about whether I would watch football on Sundays and Monday night because we usually had only one good working television, and I eventually gave up all hopes of them turning the channel and decided to start asking questions so that I would know exactly what the heck was going on. Of course as I grew older, the ripped bodies, tight uniform pants and chiseled faces made me even more interested in the game! After a while, I found myself also yelling at the television screen and getting excited about Sunday night. My brothers would make it an event. All of their friends would come over and the house would be filled with excitement and more yelling at the screen as if they had seats on the 50 yard line. I think that our house was the popular spot to watch the games because my dad would usually be at work or upstairs tucked away in his room, and my mom came from a big family and didn’t mind the loud ruckus or the beer that they snuck in (or at least they thought they were being coy). I soon found myself turning down dates on Sunday nights because I didn’t want to miss the games, and if he wanted to come over and watch it with me, then it was understood that there would be no interruptions! Even after my parents divorced, my mother, a tom boy since childhood, would host the best Superbowl parties in the area. All of my friends and my brother’s friends would make it a point to be there to watch the Superbowl. We would have soul food, beer and my brothers would always bring prizes to give away for the best guess of the score at the first half or  the first person injured. It was the party of the year and we were all passionate about the game.

So I guess thinking back, maybe my son got his passion for the game from me. And now that I’ve let him stay up a little past his bedtime to watch the games, it’s caused me to recover that passion that I had years ago. It always amazes me when I uncover treasured pieces of me that I subconsciously put on the back burner in the name of motherhood. With two young children I was usually too exhausted or busy putting someone to bed, changing diapers or making baby food to get into the game. The Superbowl would come on when it was past the kids’ bedtime, so I would have to leave the parties early to get them home to bed. For some reason or several, I let that past time go.  But thanks to the One who ushered my beloved James Franklin Hilley the third into my life, I not only have a new, special bond with him, but I am back to yelling at the television like old times, and it feels exhilarating!

Like him, I’ll sure hate to see football season end. I really get a kick out of learning from and listening to him and getting caught up in his excitement over the game. But until then, we’ll sit side by side jumping and yelling and smiling at each other, knowing that this special bond that we’ve formed will never, ever end.

Author, poet, recording artist, entrepreneur, activist and lover of children and life. Looking for nothing but joy in this lifetime!
View all posts by Toni Love →
This entry was posted in Health and wellness, Life After 40, Parenting, Recreating yourself, Relationships, Single Parenting, Uncategorized. Bookmark the permalink.

4 Responses to Tis the Season…for Football!